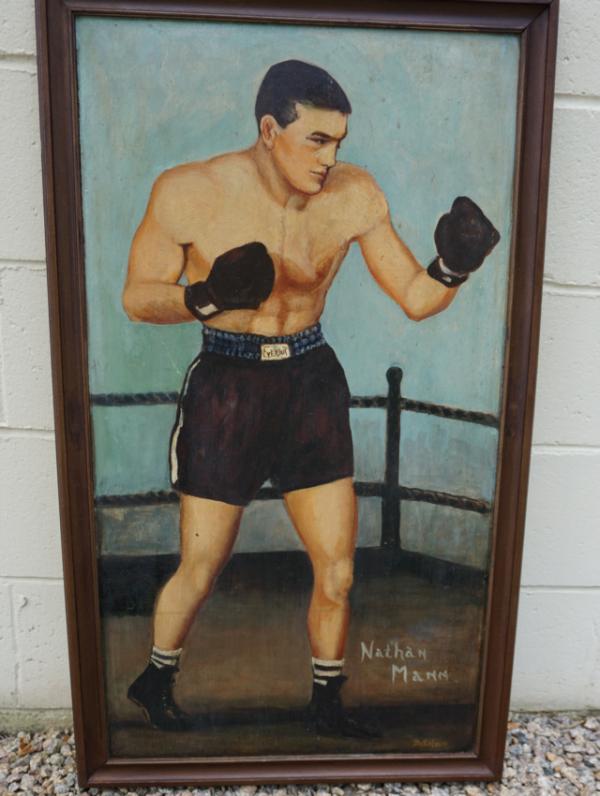 There are 9 images of this item.
Vintage oil painting on artist board of boxer Nathan Mann signed Backstrom. The frame measures 20 x 36 inches and the board measures 33 x 18 inches. Signed at lower right. Includes original boxing gloves worn by Mann. Found in a New Haven, CT, estate. Nathan Mann, aka Christmas Menchetti, was born in 1915 in New Haven, CT, to an Italian family who emigrated to the United States. He became a professional boxer in 1934. Mann won the heavyweight title of New England, beating George Fitch, on July 29, 1940, in West Haven, CT. He defended the title successfully three times (the last on February 13, 1941 against Charley Eagle), and then regained it May 25 1942, in New Haven, against Bill Weinberg. After having defended it again, he was finally beaten by Bernie Reynolds on April 18, 1946. Mann challenged the then world heavyweight champion Joe Louis on February 23, 1938, at Madison Square Garden in New York. He died in Hamden, CT, in 1999. Connecticut residents and buyers picking up in Connecticut please add the CT state sales tax. Buyers outside the USA are responsible for any taxes, tariffs or customs that might apply.
To see the entire description, all 9 images, and the price it sold for, simply fill out the form below or click the PayPal button!
"What's it worth?"