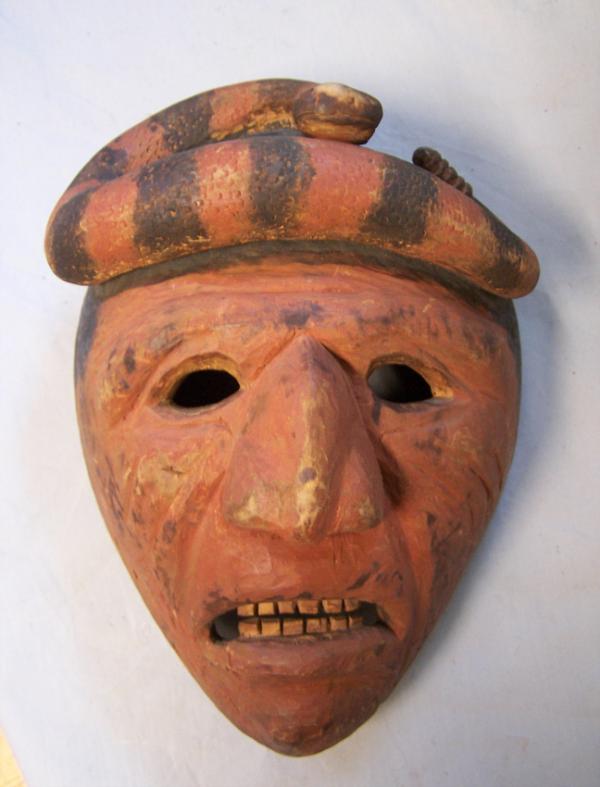 There are 9 images of this item.
Native American Indian Cherokee Booger mask with snake top c1930-40. Excellent original condition. Measures 11 inches high and 8 inches across. This mask is unsigned but clearly of Will West Long quality. To see a nearly identical mask from the Valentine Pasvolsky Collection. This undated photograph is of Will West Long (1870-1947) wearing a ceremonial dance mask. Long was born in the remote western North Carolina community of Big Cove. Raised in the traditions of the Cherokee, Long attended Hampton Institute in Virginia when he was 25 years old. He lived off the Qualla Boundary until 1904, when he returned to Big Cove, where he remained for the rest of his life. For almost 30 years, Long served on Tribal Council, where he was instrumental in establishing the Cherokee Indian Fair, among other accomplishments. He recorded his knowledge regarding Cherokee medicine, carving, music and dance, and language with the hope of preserving tradition. Long was a consultant for ethnologists, James Mooney, Frank Speck, and Franz Olbrechts. An accomplished mask maker, Long died in 1947. The Booger Dance (Cherokee: tsu'nigadu'li, "many persons' faces covered over") is a traditional dance of the Cherokee tribe, performed with ritual masks. It is performed at night around a campfire, usually in late fall or winter. Before the dance begins, the male Cherokee performers, known as "Boogers", discreetly leave the party. Booger masks, are colorful masks that represented evil spirits. Booger masks were made from wood or hornets nests and were originally made as part of the Booger Dance, a winter celebration that ensured evil spirits could not disrupt the coming growing season. The Boogers also represent the malevolent spirits of those who oppose the Cherokee. The masked men act in a lewd manner by chasing the women around, grabbing them if possible, to satirize and ridicule what is seen as the non-Cherokee's predatory lust for the Cherokee. The dance and accompanying music are traditionally believed to drive away or offer protection against the inimical spirits, and those in whom they dwell, striking fear into their hearts, while providing comedic relief for the tribal members. Eventually, these masks came to resemble the faces of the White trespassers. If you wish to browse our entire available inventory please go to OneofaKindAntiques.com. We also offer a consultation service AntiquesConsultant.com, ... as well as an online price guide at TheBestAntiquesPriceGuide.com.
To see the entire description, all 9 images, and the price it sold for, simply fill out the form below or click the PayPal button!
"What's it worth?"