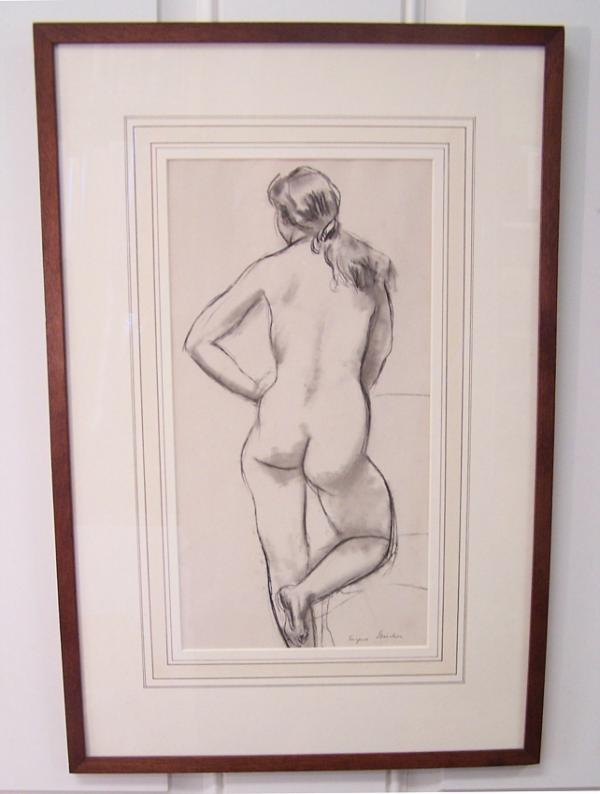 There are 7 images of this item.
Eugene Speicher (4/5/1883-5/11/1962) charcoal drawing of a female nude, circa 1920. The wood frame measures 14.5 x 21.5 inches; the image measures 14 x 7.5 inches. Signed Eugene Spiecher at lower right, excellent condition. Speicher was born in Buffalo, NY, and studied art at the Albright Art School. He moved to New York in 1907 and began attending the Art Students League where he studied with William Merritt Chase and Frank Vincent Du Mond. In 1908, he won the school's Kelley Prize with a portrait of fellow student Georgia O'Keeffe. In 1909, he took life classes with Robert Henri at the New York School of Art, which he found of great importance to his formative style. Through Henri, who became a close friend, he also became acquainted with George Bellows, who also became a close friend. Rockwell Kent, Edward Hopper, Guy PĂ¨ne du Bois, Leon Kroll, and a coterie of realist artists with whom he associated, joined the circle. In 1910, he went to Europe, where he remained for two years to study the Old Masters in Paris, the Netherlands, and Spain. Upon his return, he settled in New York City, and soon became known as one of the most promising of the younger group of American painters. He discovered Woodstock, NY, soon after and began to split his time between Manhattan and Woodstock, where he became an important and popular figure in the art colony there. From the teens, Speicher began to receive a steady stream of awards and honors. By the 1920s, Speicher was considered a leading portrait artist in America, practicing a form of realism. Among the awards he received was the Beck Gold medal for portraiture at the PA Academy of the Fine Arts in Philadelphia, in January 1920, for his painting Russian Girl. In 1926, he was awarded the Potter Palmer Gold medal at the Art Institute of Chicago for The Lace Scarf. He was also awarded the Temple Gold Medal at the PA Academy of the Fine Arts in 1938 for Marianna. Bio obtained from Wikipedia.com.
To see the entire description, all 7 images, and the price it sold for, simply fill out the form below or click the PayPal button!
"What's it worth?"