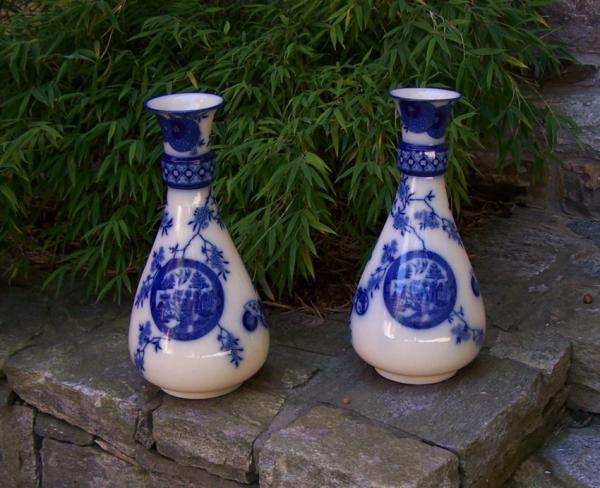 There are 12 images of this item.
Monumental pair of English blue willow porcelain vases circa 1860-1880, made by Pinder Bourne Co., in the Aesthetic / Arts and Crafts taste. Each vase is 19 inches high by 4.75 inches at top and 9 inches at the base. Signed on base. Excellent condition with deep cobalt blue colors depicting an oriental design of birds and flowers. (Following Bio from Thepotteries.org): Thomas Shadford Pinder and Joseph Harvey Bourne were business partners. Pinder had previously operated from the Swan Bank Works from 1848 and the Fountain Place Works from c1852. In 1851, he was joined by two partners and they operated as Pinder, Bourne and (John) Hope. In 1860, they moved to the already existing Nile Street Works. In 1862, Mr. Hope left the partnership and stayed at the Fountain Place Works. The Nile Street Works continued as Pinder, Bourne & Co. At some time, Joseph Bourne left the business. The '& Co' were John Harris and Ernest Joban Berg. In 1877, notice for liquidation by arrangement was made by Thomas Shadford Pinder, John Harris and Ernest Joban Berg, co-partners of Pinder, Bourne & Co. In 1877, Henry Doulton, of the Lambeth (London) pottery company Doulton & Co., was approached by Pinder, proposing he become a partner in the firm of Pinder, Bourne and Co for an outlay of ÂŁ12,000, but the money was unwisely spent and differences of opinion caused such a rift between the two concerns that only arbitration could resolve the matter. Pinder retired and and Henry Doulton continued with the business. Also in 1877, Henry Doulton was knighted, and a few years later he was awarded the Albert Medal by the Royal Society of Arts. The name of Pinder, Bourne & Co. continued to be used until 1882 when it became Doulton & Co. Ltd.
To see the entire description, all 12 images, and the price it sold for, simply fill out the form below or click the PayPal button!
"What's it worth?"