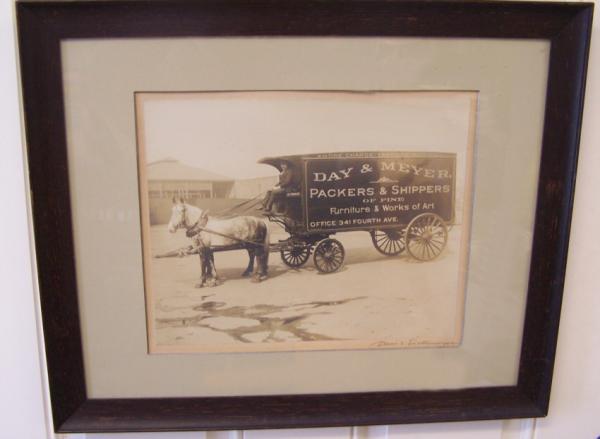 There are 4 images of this item.
Day and Meyer Packers and Shippers photograph by Davis and Eickemeyer c1900. Day and Meyer, packers and shippers of fine furniture and works of art, was located at 341 Fourth Avenue, New York City. The original frame measures 22.5 x 18.5 inches, the photo itself measures 10.5 x 13 inches. Good condition with some fading, signed on mat lower right. Eickemeyer was born in Yonkers, New York, in 1862. Though widely travelled, he would live in Yonkers his entire life. Eickemeyer's father had fled to New York in the early 1850s following political upheavals in his native Bavaria, and became a noted inventor. His firm, Osterheld and Eickemeyer, invented a hat-blocking machine that revolutionized the hat industry, and made a number of advancements in electrical lighting. The younger Eickemeyer joined his father's firm as a draftsman in 1879. Eickemeyer first became interested in photography as a means to help document his father's inventions. He purchased his first camera, an "abnormally thick" Platyscope B, on February 2, 1884, and took his first photograph, an albumen print of his sister, the following day. Immediately drawn to the camera's artistic potential, Eickemeyer considered pursuing a career as a photographer, but his father disapproved, so he continued working for his father's firm. Eickemeyer won 11 medals at the Yonkers Photo Club's Lantern Slide Exhibition in October 1890, and over the subsequent decade, he collected over a hundred medals at exhibitions and salons around the world. After his father's death in 1895, he left his father's firm and joined the Carbon Studio in Manhattan, which specialized in portraits, and gained a reputation for photographs of high-society women. That year, he and Alfred Stieglitz became the first Americans admitted to the English pictorialist society, the Linked Ring. While Eickemeyer's work appeared in Stieglitz's Camera Notes, he was unimpressed with the rise of the Stieglitz-led Photo-Secession early in the following century. He was one of four Links who never joined the Photo-Secession, the others being F. Holland Day, Margaret Russell Foster, and C. Yarnall Abbott. In 1900, Eickemeyer joined the New York Camera Club, and exhibited 154 frames in his first one-man show at the club. That same year, he published his first book, Down South, and was appointed art manager of the Campbell Art Studio on Fifth Avenue, with which he would remain intermittently until 1915. It was while at Campbell that Eickemeyer conducted his famous shoot of New York model Evelyn Nesbit. Eickemeyer was awarded the gold medal for photography at the St. Louis World's Fair in 1904. The following year, he purchased half of the photographic firm, Davis and Stanford (renamed Davis and Eickemeyer), which operated out of a studio at 246 Fifth Avenue. In 1911, Eickemeyer was commissioned by William Randolph Hearst to photograph American wives of British peerage as part of the coronation ceremonies of King George V. Eickemeyer hosted a restropective of his work at the Anderson Galleries in New York in 1922, and made his last submissions to the London Salon in 1926. In 1929, he donated most of his best-known photographs to the Smithsonian Institution. The following year, he served as a judge in Kodak's international photography competition alongside Thomas Edison, John J. Pershing, Richard E. Byrd, and Benito Mussolini. He died at St. John's Hospital in Yonkers in 1932. A collection of his photographs have been donated to the Yonkers Museum. Bio taken from Wikipdeia.com
To see the entire description, all 4 images, and the price it sold for, simply fill out the form below or click the PayPal button!
"What's it worth?"