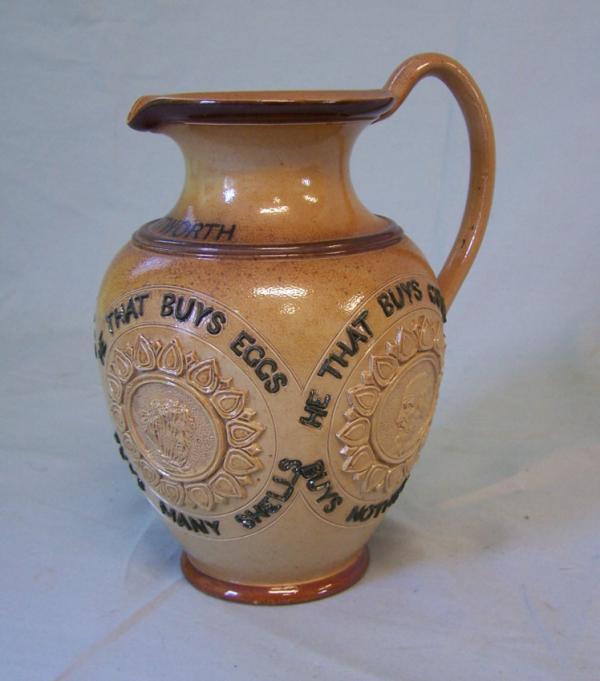 There are 10 images of this item.
A superb Doulton Lambeth stone pottery motto ware jug "The Wentworth" dated 1883. The inscription reads: "He that buys land buys stones, he that buys flesh buys bones, he that buys eggs buys many shells, he that buys good ale, buys nothing else." This highly collectible jug is fully marked on the underside and is in excellent condition with no damage. Measures 8 inches to the top of its handle. The Royal Doulton Company began as a partnership between John Doulton, Martha Jones, and John Watts, with a factory at Vauxhall Walk, Lambeth, London. The business specialized in making stoneware articles, including decorative bottles and salt glazed sewer pipes. The company took the name Doulton in 1853. By 1871, Henry Doulton, John's son, launched a studio at the Lambeth pottery, and offered work to designers and artists from the nearby Lambeth School of Art. The first to be engaged was George Tinworth, followed by artists such as the Barlow family (Florence, Hannah, and Arthur), Frank Butler, Mark Marshall and Eliza Simmance. In 1882, Doulton purchased the small factory of Pinder, Bourne & Co, at Nile Street in Burslem, Staffordshire, which placed Doulton in the region known as The Potteries.
To see the entire description, all 10 images, and the price it sold for, simply fill out the form below or click the PayPal button!
"What's it worth?"

Copyright 2023, The Best Antiques Price Guide, a division of One of a Kind Antiques, LLC. All Rights Reserved.
https://www.indirimkuponu.me/