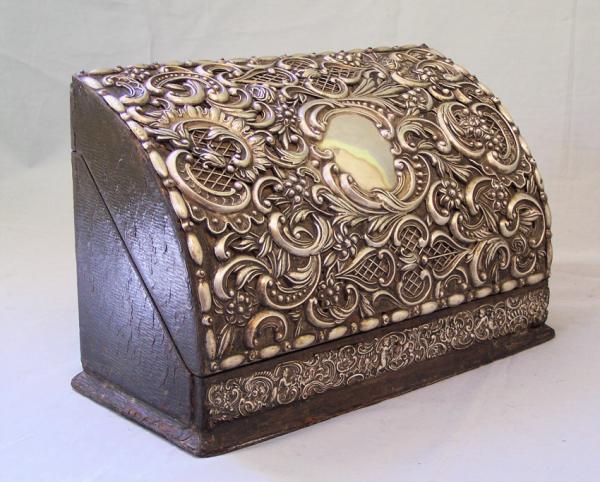 There are 11 images of this item.
Sterling silver letter box William Comyns and Sons maker London c1902. Silver over leather over wood. Measures 5.5 inches deep by 8 inches high by 12 inches wide. Wonderful original condition with moire silk interior. William Comyns purchased the business of Robert Tagg, itself said to have been founded about 1730. As yet efforts to trace the latter's lineage have failed; it seems clear, however, that Tagg succeeded John Tapley at 40 Roupell Street, Waterloo Road. Tapley, a manufacturing silversmith, was probably the last of Rundell, Bridge & Co.'s outworkers and is also known to have provided work for Robert Green & Co and Makepeace & Walford. Robert Tagg moved in 1857 to his new residence and manufactory at 2 Carlise Street, Soho Square, where by 1859 he listed as a silversmith. William Comyns, thereafter listed as a silversmith, appears to have purchased the business in 1858 or early 1859, entering his first marks from the first same address. He moved to 1 Percy Mews, Rathbone Place, the to 16 Silver Street, Golden Square, Soho, and seubsequently to Beak Street, Regent Street. These premised were later expanded to 41, 43, and 45 Beak street and to 41, 43, 45, 47 Beak Street. Additional premised were taken from c. 1903 at 54 Marshall Street, Soh. The style of the firm was changed to William Comyns & Son c. 1885 when William Comyn's two sons, Charles Harling Comyns and Richard Harling Comyns were admitted to their partnership. William Comyns died in January 1916, and C.H. Comyns while attending a sale in Christie's in 1925. The business was incorporated as limited liability company as William comyn's & Sons Ltd., registered on 20th October 1930, with R.H. Comyns as permanent governing director. Upon the latter's death in 1953, when the firm is said to have lost its former prominence, William Comyns & Sons Ltd was purchased by Bernard Copping. They are now one of the few surviving manufacturing silversmiths in London, with premises at Comyns House, Tower Street, London, WC2. William Comyns first appears to have made a significant impact in the early 1880s by supplying increasingly large numbers of decorative wares in silver, many of which were die-stamped. London retailers of their products at this period included Henry Lewis, Howell & James Ltd., etcetera. Bio from http://www.koopmanrareart.com
To see the entire description, all 11 images, and the price it sold for, simply fill out the form below or click the PayPal button!
"What's it worth?"