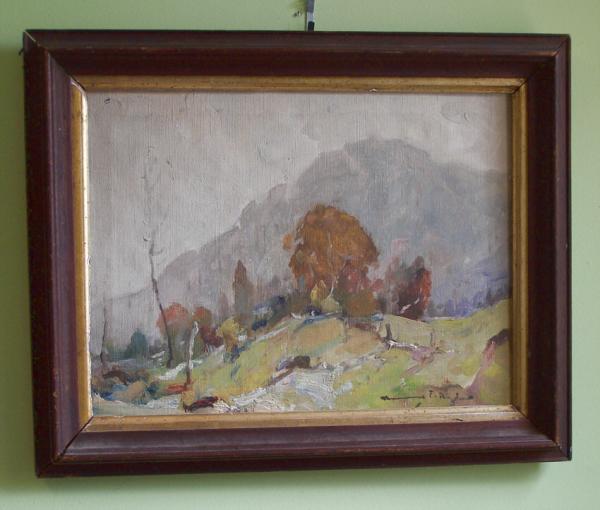 There are 6 images of this item.
Chauncey Foster Ryder oil painting on canvas impressionist landscape c1900. signed Bruestle lower right. Just in from a Lyme CT estate. Measusres 12 x 16 inches. The orignal walnut frame with gold leaf insert measures 16 x 20 inches. The gold leaf insert has some chips and flakes on one side.The painting could use a minor cleaning, it is in excellent original untouched estate condition. A painter noted for his landscapes that reflected both Impressionism and Tonalism, Chauncey Ryder was also one of the more successful painters associated with exhibitions at the Macbeth Gallery in New York City. His paintings became popular with collectors "who were drawn to paintings that inspired a reflective state of mind and who admired Ryder's ability to achieve 'the right proportion between the real and the unreal, between detail and vagueness.' " (Lowrey) He grew up in New Haven, Connecticut, and in his 20s, moved to Chicago where he was a student at the Art Institute of Chicago and at the art school, Smith's Art Academy. He later was a teacher there. In 1901, Chauncey Ryder enrolled in the Academie Julian in Paris where he studied with Raphael Collin and Jean Paul Laurens. He exhibited genre scenes in the Paris Salon, 1903-1906, and also painted at the port town of Etaples, France with other American artists including Max Bohm and Roy Brown.In 1907, he returned to America, settling in New York City, and three-years later became one of the Macbeth Gallery artists. He also purchased a house in Wilton, New Hampshire and began a routine of spending seven months of each year there, April to November, and the remaining months in New York.In 1910 and 1911, he painted and exhibited at Old Lyme, Connecticut, and did a panel, Winter Landscape, for the home of Florence Griswold, a key person in that community. In 1920, he was named Academician by the National Academy of New York. He exhibited for over 30 years with the American Watercolor Society.Sources include: Carol Lowrey, 'Chauncey Foster Ryder', The Poetic Vision: American Tonalism, p. 164 (Spanierman Galleries, LLC) Ronald Pisano, American Art & Antiques, 10/1978, "Chauncey Foster Ryder Peace and Plenty." Bio obtained from AskArt.com. See Peter Hastings Falk, Editor, Who Was Who in American Art for more information on the artist.
To see the entire description, all 6 images, and the price it sold for, simply fill out the form below or click the PayPal button!
"What's it worth?"