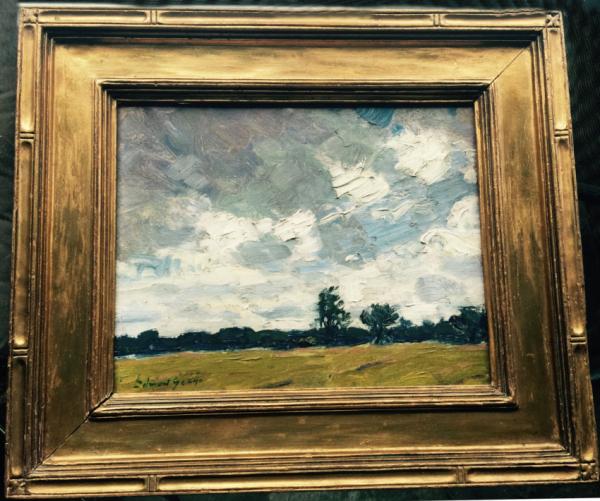 There are 11 images of this item.
Impressionist landscape by British artist Edward Brian Seago. Oil on artist board, with thick impasto typical of Seago's work from his early period. The painting's focal point is the extraordinary windy sky with its mauve and gray rain clouds obscuring the blue sky beyond. The scene is grounded low with a pea green field and a dark wind tossed tree line. Probably painted in Norfolk because it is so similar to his other works from this area. Seago was born in Norwich in 1910, and died in London in 1974. He was largely self taught but received guidance under Bertam Priestman, R.A. He traveled and worked in Italy, France, Sardinia, Portugal, Morocco, and Hong Kong. His work has been shown in London, Glasgow, New York, Montreal, Los Angeles, Oslo, and Brussels; his work hangs in the Fine Arts Museum of San Francisco. The image measures 8" x 10". It is signed at lower left, and pencil dated verso Sept. 11, 1932. It is in excellent original condition. To see other examples of Seago's works showing the exact same signature and nearly identical subject matter, please go to AskArt.com and type in Edward Seago. "The Bure Valley" features the same signature; it sold at Samuel T. Freeman Co., lot 49, on 6.19.2011. "The Marsh Gate" features similar sky, tree and horizon lines; it sold at Bonham's Knightsbridge, lot 115, on 11.15.2011. "Landscape Near Upton-Norfolk" features a very similar landscape; it sold at Weddington's, lot 116A, on 12.08.2009. For many more examples, please go to Artprice.com and type in Edward Seago, or www.EdwardSeagoPaintings.com
To see the entire description, all 11 images, and the price it sold for, simply fill out the form below or click the PayPal button!
"What's it worth?"

Copyright 2023, The Best Antiques Price Guide, a division of One of a Kind Antiques, LLC. All Rights Reserved.
https://www.indirimkuponu.me/