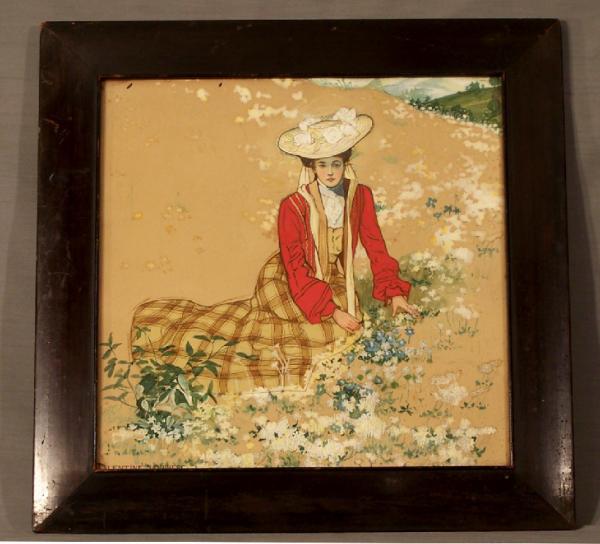 There are 4 images of this item.
Valentine Sandberg watercolor Illustration c1900. Sandberg was Swedish born in 1881, He is listed as one of the important artists in the Golden Age of Illustration. Here is a listing taken from AmericanArchives.com New York newspaper art departments until he his first assignment, a plumb one, painting a cover for The Munsey. With further Munsey work, he did covers for Success, Harper's Weekly, Life, Sunday Magazine, Home Life, Modern Priscilla, Judge, and People's Popular Monthly. Ad assignments included Ferry's Seeds, Swift's, Falstaff, and Vitralite. He was so popular, he was reprinted in posters and calendars. When Sandberg, like others, was asked to mimic the fade-away style of Coles Phillips, he fulfilled his assignment brilliantly and this became a curse with time. Other artists (Leyendecker, Stanlaws) did fade-aways, but Sandberg alone was saddled with "copying." Sandberg was capable of far more than his excellent fade-away work and deserves a re-evaluation.There was an article about Sandberg winning a prize for a patriotic U. S. art slogan that appeared in Time magazine July 11, 1932 under "Clarion Call". This piece is in original estate condition. The frame measures 20 inches by 20 inches, the image itself measures 16 x 16 inches. Signed lower left.
To see the entire description, all 4 images, and the price it sold for, simply fill out the form below or click the PayPal button!
"What's it worth?"