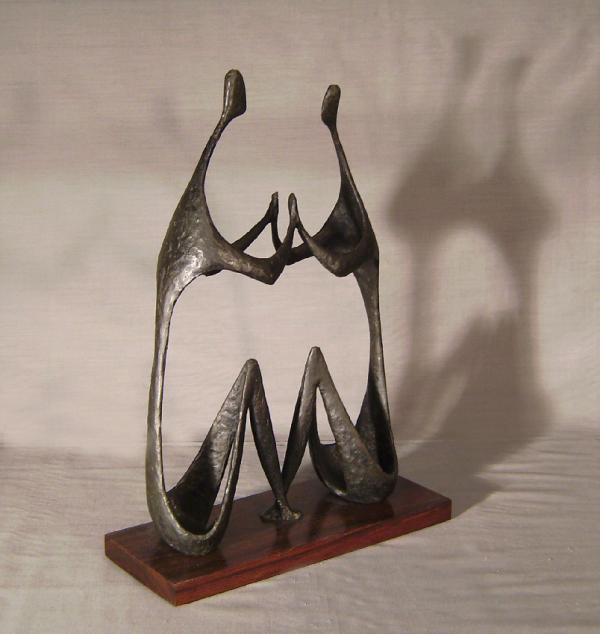 There are 9 images of this item.
Ruth Trobe hand forged bronze sculpture of a man and a woman. Born 1913 D 2009. The daughter of Samuel and Rose Weiner, Russian-Jewish immigrants,she was born In 1913 in the tiny Jewish community of Beaver Falls PA. In 1936, she married Harold Trobe, also of Beaver Falls. The Weiner and Trobe families knew each other well, although the Weiners were secular socialists and Harold Trobe's father was the town rabbi. In 1947, Ruth and Harold and their two sons, aged 4 and 2, moved to Vienna, Austria where Harold was in charge of displaced persons camps that housed the survivors of the Holocaust. Ruth opened a sculpture studio and soon began to exhibit her work. Harold's social service work on behalf of worldwide Jewry later took the family to Geneva, Rome, Paris, Rio de Janeiro, and Jerusalem, over a 33-year period of living abroad. With access to a glittering international society, Ruth hosted artists, musicians, composers, writers, journalists, Fulbright scholars, and ambassadors. For these peripatetic expatriates, who gathered in her salon, she made critical personal connections and found the best buys. She claimed that she could often identify the undercover CIA agents among them and sometimes even pry out their secrets. Her sculptures, mostly semi-abstract figures of men and women, were displayed in galleries around the world. Among the owners of her work were Golda Meir, past prime minister of Israel, and Leon Fleisher, the noted pianist. This information was obtained from her obituary at http://obits.mlive.com/obituaries/annarbor/obituary.aspx?n=ruth-trobe&pid=130738556 . The sculpture measures 16 inches high by 9.5 inches wide by 3.5 inches deep. The rosewood base measures 11.25 by 4.25 inches. Very few sculptors have the skill to forge a piece by hand to this degree of detail.
To see the entire description, all 9 images, and the price it sold for, simply fill out the form below or click the PayPal button!
"What's it worth?"