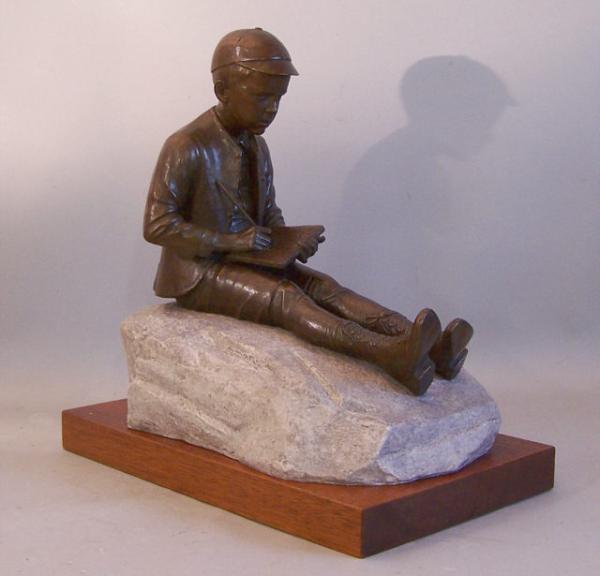 There are 12 images of this item.
Bronze figure of Eugene O'Neill as a child. We are honored to have been chosen by Mr Legassie to sell this bronze in a limited edition. The figure measures 12 inches high by 16 inches long by 8 inches wide. The entire sculpture measures 18.5 inches high by 18.5 inches long by 11 inches wide, including the mahogany base. Artist's Biography: Norman Legassie began his sculpture career at the Lyme Academy of Fine Arts in Old Lyme, Connecticut, and was awarded scholarships for study for three consecutive years. He was a faculty member there from 1983 to 1988, teaching portrait and figure sculpture.This sculptor's principle works include the portrait bust of Senator Thomas Dodd, which stands in the entry of the Thomas J. Dodd Archives & Research Center of Judaic Studies and Oral History, at the University of Connecticut at Storrs. Mr. Legassie's seven-foot bronze figure of an American construction worker, completed in 1993, is a memorial to the victims of the 1987 L'Ambiance Plaza building collapse in Bridgeport, Connecticut. In addition, his portrait bust of George W. Crawford, 33rd Sovereign Grand Commander, is on view at the Prince Hall Freemasonry, Philadelphia, Pennsylvania.Other principle works include a larger version of this bronze figure of the American playwright Eugene O'Neill as a child, located at City Pier, New London, CT, with smaller versions installed at the Beinecke Library, Yale University, and in Shelykovo, Soviet Union, at the country estate of the 19th-century Russian dramatist, Alexander Ostrovsky. Mr. Legassie's portrait bust of Susanne K. Langer, American philosopher and author, can be found at the Charles E. Shain Library, Connecticut College, New London, CT, while other portraits and sculptures are in public, private, and corporate collections.
To see the entire description, all 12 images, and the price it sold for, simply fill out the form below or click the PayPal button!
"What's it worth?"