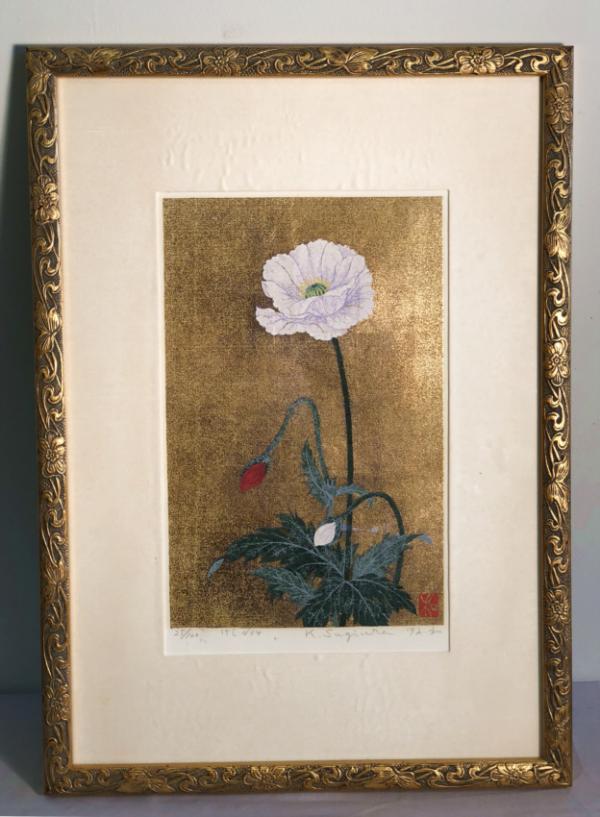 There are 9 images of this item.
Kazutoshi Sugiura Japanese Poppies serigraph number 4, 25/100, dated 1992. Veerhoff Galleries, Washington, DC, label on reverse. Signed at lower right and numbered at lower left. Sugiura Kazutoshi was born in Kyoto in 1938. In 1957 he enrolled in the painting course at the Kyoto Municipal College of Fine Arts where he graduated in 1963 with a major in nihonga (Japanese-style painting). He then continued on a graduate course until 1967 when he began studying Japanese classical painting at the Kyoto National Museum. From 1968 to 1972 he studied fine art restoration, and in 1978 he was awarded a top prize for nihonga (Japanese style) painting by the Kyoto Federation of Galleries. Although very successful as an artist, he still teaches art at a Kyoto high school. From 1960 to the present, he has had solo shows at the Yamada Art Gallery in Kyoto; from 1986 to the present annual exhibitions in Tokyo. Since 1978 he has been represented at the annual CWAJ Print Show in Tokyo, and has for many years been shown at the annual exhibition of the Japan Print Association in Tokyo. He has also had other solo exhibitions in Tokyo, Portland, New York, Maryland, Washington, Connecticut, and a travelling solo show in the US and Canada. He is represented in the British Museum, the Chicago Art Institute, the Brooklyn Museum and numerous private collections. Sugiura Kazutoshi is best known for his flower compositions. He relies on traditional Japanese techniques to execute his beautiful silkscreens. He applies squares of gold leaf, in the same way old screens were made, onto handmade Japanese paper. His next step is to silkscreen his floral subjects onto the gold leaf. As each tone requires a separate screen, a colorful and complicated print may go through twenty printing stages. Next, blocking out the flowers, he uses a wash of pale shades of blue, purple, or green to cover the rest of the work, thereby toning down the glittering gold leaf and softening the effect.
To see the entire description, all 9 images, and the price it sold for, simply fill out the form below or click the PayPal button!
"What's it worth?"